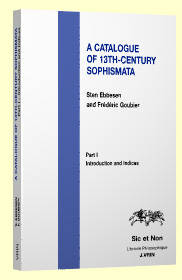 A Catalogue of 13th-Century Sophismata

A Catalogue of 13th-Century Sophismata

In the terminology of the medieval faculties of arts a sophisma was a proposition that produced problems for logic or grammar because, apparently, it could be shown to be both true and false or both grammatically correct and incorrect. Analysis of sophismata played a major role in university teaching, and a rich literature reflecting this practice is still preserved.
This catalogue offers the first ever opportunity to orient oneself in the jungle of 13th-century texts on sophismata, edited and unedited alike. It lists and describes every single collection, but also, importantly, in an alphabetical catalogue of sophismatic propositions, under each lists every occurrence of it in the corpus, with information about where each occurrence is found in manuscripts or editions, the syncategoreme to which it belongs, the kind of analysis it displays, what is the solution offered, and which questions, if any, receive special attention in quaestiones/problemata, an incipit and an explicit where there is no edition available, and finally, what secondary literature there is, if any.
Some 3.000 entries make up the body of the catalogue, which is completed by extensive indices by topics and by logical tools used in the solutions, offering scholars a multiplicity of ways to find exactly the information they are looking for.
S'identifier pour envoyer des commentaires.