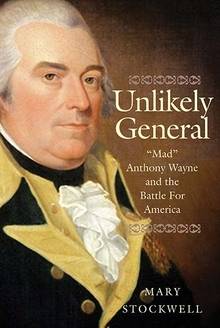 "Mad" Anthony Wayne and the Battle for America

In the spring of 1792, President George Washington chose “Mad” Anthony Wayne to defend America from a potentially devastating threat. Native forces had decimated the standing army and Washington needed a champion to open the country stretching from the Ohio River westward to the headwaters of the Mississippi for settlement.

A spendthrift, womanizer, and heavy drinker who had just been ejected from Congress for voter fraud, Wayne was an unlikely savior. Yet this disreputable man raised a new army and, in 1794, scored a decisive victory at the Battle of Fallen Timbers, successfully preserving his country and President Washington’s legacy. Drawing from Wayne’s insightful and eloquently written letters, historian Mary Stockwell sheds light on this fascinating and underappreciated figure. Her compelling work pays long-overdue tribute to a man—ravaged physically and emotionally by his years of military service—who fought to defend the nascent American experiment at a critical moment in history.
S'identifier pour envoyer des commentaires.