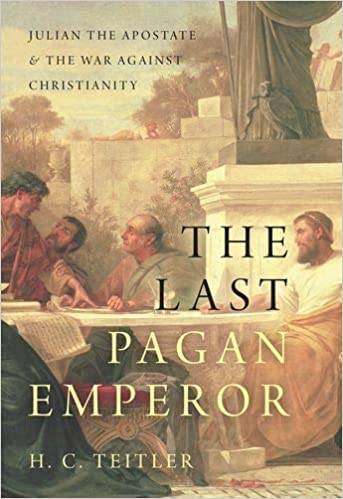 Julian the Apostate and the War Against Christianity

Flavius Claudius Julianus was the last pagan to sit on the Roman imperial throne (361-363). Born in Constantinople in 331 or 332, Julian was raised as a Christian, but apostatized, and during his short reign tried to revive paganism, which, after the conversion to Christianity of his uncle Constantine the Great early in the fourth century, began losing ground at an accelerating pace. Having become an orphan when he was still very young, Julian was taken care of by his cousin Constantius II, one of Constantine's sons, who permitted him to study rhetoric and philosophy and even made him co-emperor in 355. But the relations between Julian and Constantius were strained from the beginning, and it was only Constantius' sudden death in 361 which prevented an impending civil war.

As sole emperor, Julian restored the worship of the traditional gods. He opened pagan temples again, reintroduced animal sacrifices, and propagated paganism through both the spoken and the written word. In his treatise Against the Galilaeans he sharply criticised the religion of the followers of Jesus whom he disparagingly called 'Galilaeans'. He put his words into action, and issued laws which were displeasing to Christians--the most notorious being his School Edict. This provoked the anger of the Christians, who reacted fiercely, and accused Julian of being a persecutor like his predecessors Nero, Decius, and Diocletian. Violent conflicts between pagans and Christians made themselves felt all over the empire. It is disputed whether or not Julian himself was behind such outbursts. Accusations against the Apostate continued to be uttered even after the emperor's early death. In this book, the feasibility of such charges is examined.
S'identifier pour envoyer des commentaires.